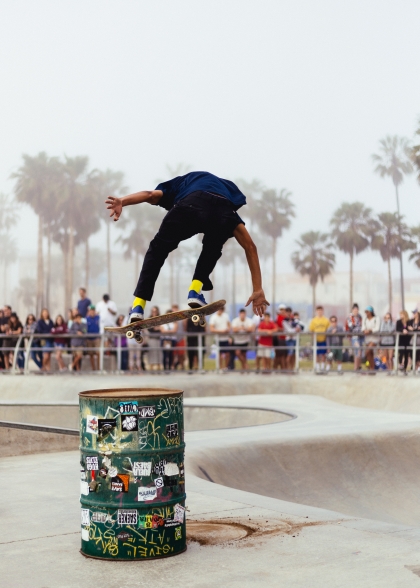 If you have ever watched any of the videos, FailArmy puts out you know that we live in a world with crazy people. There is something about craziness, and an unusual taste for risk-taking that draws many of us in, at the very least, to be spectators of someone else’s risk taking. From SpaceX and their mad pursuit of modern space travel, those that risk theirs lives to climb Mt Everest, to a guy named Walt who thought it would be a good idea to build multiple theme parks on some Florida swampland. As people there is just something about the adrenaline rush, we get when attempting great things.

There is an element to this that is the most important. No one risks anything with the hope of failing; instead, there is faith in the science, the gear, the economy, etc.

We all have faith in something:

Faith is something that even if we don’t talk about it, we have faith in something, or several things.

fāTH/ 1. complete trust or confidence in someone or something.

In Matthew 17:14-21 we see Jesus talk about faith with His disciples. Jesus is presented with the request to heal an epileptic, demon possessed boy. It is shared with Jesus that His disciples were unable to heal the boy. After Jesus heals, he turns His focus to the disciples. He described to them their problem of “little faith” and told them that all they needed was “faith like a grain of mustard seed.” This comparison seems confusing at first glance; little faith vs. small faith. But what Jesus was saying to them was vastly more impactful and is also what we need to hear.

The disciples “little faith” was focused on themselves, and they assumed that since they had performed these type of miracles before, that they could again. Their focus was on the gift and not on the power of God.

But Jesus then talks about faith and the amount needed for great things to happen. “Faith the size of a mustard seed.” This small amount of faith leads to nothing being impossible. Jesus is speaking metaphorically here; we are not going to be shifting mountains around. But the impact of a small amount of faith in God can lead to greater things.

What Jesus is trying to help His disciples understand, and what we also must understand, is that faith in God and what He is doing through Christ can change the lives of people, including our own. The physical healing was not the ultimate need, but what Jesus was about to do on the cross was what would bring about ultimate healing and change.

It’s easy to look at these verses and expect that with a little more faith we can do something amazing. We cannot coerce God into anything. The reality is, through faith in God we can participate in the transformative work of the Gospel. We can take part in the most transformative, healing work ever to touch humanity. This is the incredible impact of mustard seed faith!

But often we do not want this kind of change enough to lead us to faith or action of our faith. Often we do not think about the weight of realizing our friends, family, coworkers, and neighbors as dead souls headed to eternal separation from God. We are hindered more readily by our fear of being treated like the fool, laughed at, being left out, and embarrassment. Initially, the disciple’s faith failed because it was more about themselves rather than exercising their God-given gifts to bring Him glory. So we must ask ourselves the question, what am I doing with my faith? We aren’t called to go around healing people, but we are called to reach people with Christ and disciple them.

If we believed in the Gospel, and the power it has to change people from the inside out, then we wouldn’t hesitate to share it. We would constantly be looking for opportunities to share how Christ is relevant to us every day. But are we willing to take the crazy leap of faith in God and His mission?

Take this Easter season as an excellent opportunity to reach out to your neighbor and invite them to a service or special event that your local church might be having. Start putting action to your crazy faith, not so you can feel better or more accomplished, but so that God receives glory through His Son’s name being proclaimed to those that need Him most!